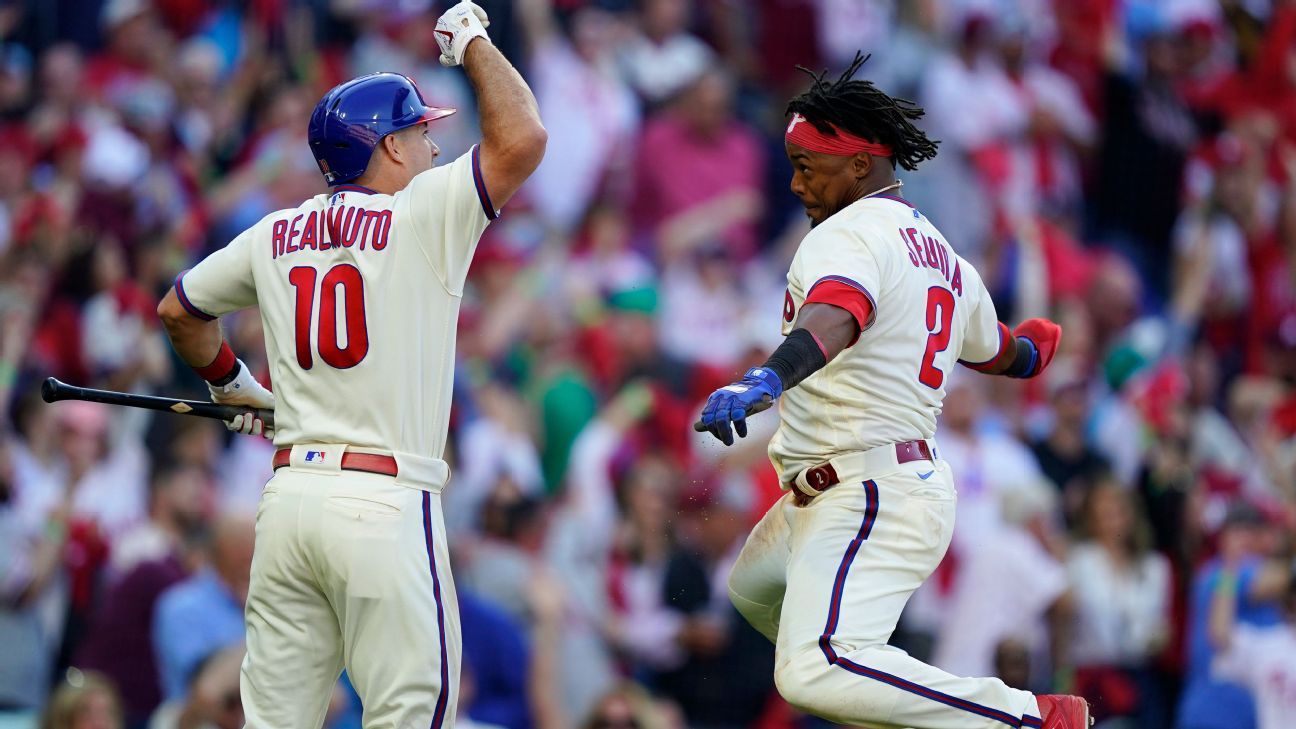 Eight teams started Saturday still in the 2022 postseason. After today’s league division series games, that number could be cut nearly in half.

The Philadelphia Phillies eliminated the Atlanta Braves with an 8-3 NLDS Game 4 victory that had Philly’s Citizens Bank Park rocking.

Next, the Seattle Mariners play their first home playoff game in more than 20 years, hoping to avert a sweep against the Houston Astros. And the San Diego Padres will take the field in Game 4 with a chance to knock out the 111-win Los Angeles Dodgers after holding on for a 2-1 victory in Game 3.

The only series that can’t end today? The other ALDS matchup, between the New York Yankees and Cleveland Guardians, who split the first two games in Bronx.

Follow the action below all day long with start times, pitching matchups and starting lineups as they’re announced, followed by in-game updates and takeaways after each game is concluded.

More: Everything you need to know about the 2022 MLB playoffs | Previewing LDS matchups | Could this be the greatest postseason … ever? | Bracket, results and more

Hail to the king

Return of the King 👑

Felix Hernandez is back in Seattle for the Mariners first playoff game since 2001!

Aaron Judge‘s first hit of the postseason is a game-tying two-run homer. Prior to that homer, Judge had been 0-9, with 8 strikeouts this postseason. According to ESPN Stats and Information, that was Judge’s 12th career postseason home run which broke a tie with Bernie WIlliams for the third-most by a Yankee through their age-30 season. Judge trails only Mickey Mantle (14 HR in 54 games) and Derek Jeter (14 HR in 110 games).

Get ’em on. Get ’em over. Get ’em in.#ForTheLand pic.twitter.com/61figmJTfD

Cleveland is ready to rock

A house party on a Saturday night.

Why this series is over: If you felt the energy at Petco Park on Friday night, you’d know why. In Game 4, the Padres will once again have a raucous sold-out crowd behind them and the perfect pitcher on the mound — Musgrove, the San Diego native and lifelong Padres fan who dreamed of pitching on a night like this and is fresh off shutting down the Mets in the decisive game of the previous series. — Alden Gonzalez

Why it isn’t: It’s the Dodgers, for crying out loud. They didn’t win 111 regular-season games for no reason. Heck, they didn’t win 14 of those games against these Padres for no reason. The Dodgers had plenty of opportunities to grab leads in Games 2 and 3 — and simply didn’t come through with runners in scoring position. At some point, one would think, they will. They’re too good not to. — Gonzalez

Congratulations to Cara and Will Smith on the birth of their beautiful baby girl who was born this morning. Both mom and baby are doing well.

Once again, Major League Baseball will not have a repeat World Series champion after the Phillies bounced the Braves from the postseason with a resounding 8-3 victory in Game 4 of their NLDS.

Just as they did in all three of their wins in the series, the Phillies jumped to an early lead that had Atlanta playing chase pretty much from the beginning — and for the second day in a row, it was a party from start to finish at a raucous Citizens Bank Park.

Instead of a bat-spike home run celebration providing the signature moment like it did in Game 3, the highlight on Saturday was a spring around the bases. In the third inning, J.T. Realmuto became the first catcher in postseason history to hit an inside-the-park home run, one inning after Brandon Marsh ignited the crowd with a three-run blast.

Two things are clear no matter who Philly faces in the NLCS: This team that found new life earlier in the season when manager Rob Thomson took over won’t be an easy out for anyone – and when the Phillies take the field at home in an NLCS for the first time since 2010 next Friday, it’s going to be quite a scene in Philadelphia. — Jesse Rogers

Rhys Hoskins drives in another run!

The Phillies are pouring it on! Philadelphia fans can feel it!

According to ESPN Stats and Information, that is the first inside-the-park home run by a catcher in postseason and the first time any Phillies player has done it in the playoffs.

Braves get one back

A solo shot gets the @Braves on the board!

THIS IS MARSH!!!!!!!!! #Postseason pic.twitter.com/xOitZ3UPts

The Philadelphia native know a bit about winning when it counts.

day game in the city that spawned the Day Man, we’re gonna have to fire on all cylinders