Everybody’s talking about Everybody’s Talking About Jamie, as the film finally hits screens after a pandemic-enforced delay.

The new all-singing and all-dancing Amazon Prime Video original movie about a teenager who wanted to live out his drag queen ambitions at his school prom, hails from humble beginnings.

Starting life as a BBC Three documentary in 2011, producers followed the real-life story of Jamie Campbell from Sheffield, who was told he would not be allowed to wear a dress for his year 11 prom, despite wanting to.

It captured the imagination of writer Tom MacRae and songwriter Dan Gillespie-Sells – the lead singer of The Feeling, who turned the story in to a musical which, initially, was only ever supposed to get a two-week run in a Sheffield theatre.

“It’s amazing that when we just got commissioned to do two weeks in Sheffield for a show that had no star names, no story, no new songs and basically no publicity budget,” MacRae told Sky News.

“And we thought we’ll have two weeks, we’ll do a nice show and have fun. Everything that’s happened from the back of that all those years ago – it’s still hard to take in.”

MacRae credits an unlikely group of people for the show’s success too – saying he’d lost hope after a disastrous dress run and was unsure if anyone would even see the musical, but was vindicated when punters queued round the block to see this new piece of work.

“I worked out it was our cleaning ladies who’d heard us rehearse and they told their friends, ‘you’ve got to see the show’.

“So as everything took off, I could say, hand on heart, we owe it all to the cleaning ladies at the Sheffield Crucible Theatre and just the people of Sheffield who had come and supported us.”

That short run in Sheffield though was all they needed to send the story stratospheric, with MacRae saying it was in that space of time that a West End show and a movie had been agreed.

Jamie Campbell, who inspired the show and film, says he never dreamed anything like this would be possible.

“I just didn’t think it would get to this point – but now it feels amazing,” he told Sky News, the morning after the film’s premiere.

And while the story centres on Jamie and his mission to wear a dress to his school prom, he says the story is much more than that – it’s about helping people take control of their own lives.

“The dress isn’t just a dress – the dress is almost like a metaphor for anything that you want to do,” he said.

“You might not want to go to a prom in a dress, but you might want to do something else, and I hope people take the power to do whatever that something else is and just go for it and not be scared and ashamed, and not to live for other people. It might be scary, but just go for it.”

And what about seeing the likes of Oscar-nominee Richard E Grant in a film based on his life? Or BAFTA and National Television Award winner Sarah Lancashire? Or Corrie royalty Shobna Gulati?

“Sarah Lancashire (who plays Jamie’s mum in the film) is an absolute icon, I love her and was so happy with the portrayal as well.

“Richard Grant – he’s a national treasure, so for him to come in and play Loco Chanel (the drag queen mentor), so beautifully and so respectfully as well… I have a lot of love and respect for him because he wanted to do it justice, and I think he did do that. 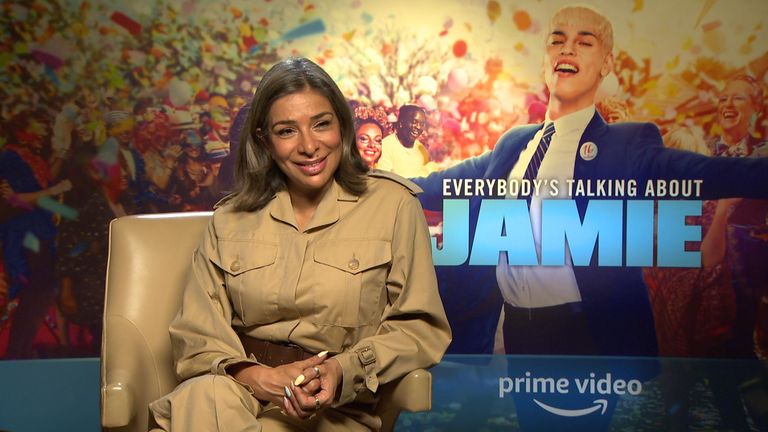 Gulati is a special member of the film’s cast, having previously performed the musical in the West End as well as currently touring the UK with it.

Best known for playing Sunita for 12 years on Coronation Street, Gulati says that diversity in this film is something truly worth celebrating.

“I’ve been in the industry a long time and to be a part of this process, bringing this story, at this moment, means everything to me.

“Watching the kids dancing and everybody on that screen, I thought ‘I’ve never seen that before in my life’… and I’m just so happy to be there celebrating with everybody else.”

The story’s diversity is undoubtedly part of its success, with the stage show choosing to cast people from a number of ethnically diverse backgrounds and put them centrally in the narrative – something underlined by Jamie’s best friend, Pritti Pasha.

Pritti is a Muslim teenager who wears a hijab and is rarely made-up – a complete antithesis to the bombastic Jamie.

She’s played in the film by Lauren Patel, who told Sky News: “Any kind of story that one provides a bit of joy and a bit of comfort to people, and anything that makes people feel seen, deserves to be told.

“I think that the lovely thing about the representation in this film is it’s all just a small part of these very 3D characters to me. Jamie and Pritti, and the fact that it’s set in working class Sheffield and stuff, they’re all just small pieces of this whole little Jamie puzzle.”

But the biggest piece of the Jamie puzzle is Max Harwood, who makes his film debut in Everybody’s Talking About Jamie as the titular character.

He told Sky News that he was proud to be part of such an openly queer film, but that the story could easily relate to others with bold ambitions.

“I think that the specificity of it is incredibly, incredibly important, but actually what I love so much about this story more than anything… is that this story has such universality about it and that it can be for everyone.

“Gone are the days where hopefully queer films are sidelined and not in the mainstream and in a subsection of movies… this film is a family film for everyone.

But something everyone agrees on is the unbridled joy that this film exudes – and ultimately why the cast, crew and creatives want you to see it.

Tim Cook says Apple will use chips built in the U.S. at Arizona factory
Row over whether Royal Family were approached for series after Netflix say they were contacted
Ford Pro advances DHL’s EV rollout with over 2,000 E-Transit electric vans
Quick Charge Podcast: December 5, 2022
Christopher Eccleston: ‘Patriarchy cocks everyone up… It did its damage to me too’