Headlines are highlighting Europe’s energy challenges at present, with extremely high natural gas prices shocking consumers and corporations. But this was entirely predictable, and in fact was predicted. The real problem was the pivot to natural gas as a bridge fuel, and too much focus on building efficiency instead of fuel switching.

This US data shows a clear picture that has implications globally. The fracking and shale oil boom of the 1990s to 2010s led to a period of unnatural stability in natural gas prices, and at a historically low level. The fracking companies started bankrupting in 2019 because their debt-fueled business model and race for the bottom was unsustainable. The COVID crisis put more pressure on them with globally reduced demand for both oil and gas, so more went under or significantly diminished operations. A few European countries banned fracking entirely, given its significant negative externalities of methane leakage, aquifer pollution, microquakes and general pollution.

Then the Saudi-Russian price war put a nail in the coffin of the unconventional extraction industry, targeted high-priced producers globally. That meant unconventional oil extraction was under the gun, and a great deal of natural gas comes from shale oil fields in many regions.

As a result, the ability to turn the natural gas supply up when demand increases has radically diminished around the world. It’s no longer effectively something with an infinite supply that can be turned up in weeks at most.

Over the same period, the world built a lot of natural gas plants to displace coal, a partial good as natural gas generation has lower emissions than coal, something that is somewhat challenged by methane leakage. Some, like Texas, restructured their electrical generation around the assumption of just-in-time extraction and delivery of natural gas, and they froze in the dark in February of 2021 as a result.

Europe is facing the another facet of the same challenge that Texas did eight months ago. It’s consuming 33% more natural gas annually than it did in 1990, after a short-lived decline in the early 2000s. 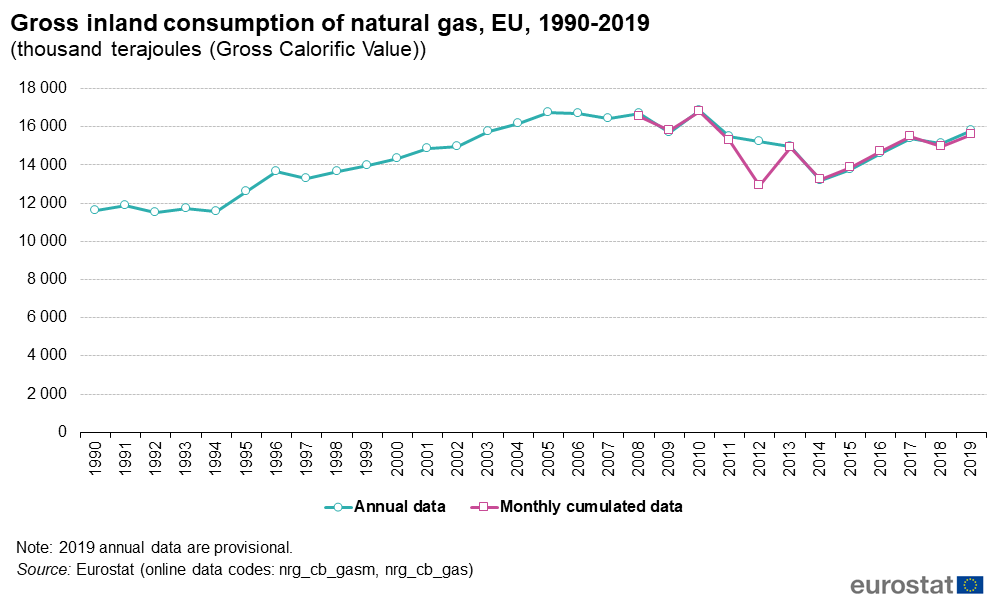 Natural gas is now returning to its mid-2000s habit of being a fluctuating price resource, with both greater month-to-month variance and even greater seasonal variance. All economies and facilities that have made strategic business decisions based on the false assumption of low prices and price stability of natural gas are paying the price this year. Given the growing chorus of concern about methane leakage from natural gas and shale oil extraction sites over the past decade, and given the clear reality of the climate crisis, this isn’t a surprise.

It also adds another nail in the coffin of “blue” hydrogen as a future energy source, even as the oil and gas industry works really hard to dismantle the coffin. Most hydrogen from natural gas schemes assume cheap natural gas and stable prices, not significant demand competition for a limited resource. Already unaffordable with fictitious CCS, all governments should be looking at 2021’s natural gas price shocks and reliability failures and pivoting away from “blue” hydrogen, regardless of fossil fuel industry lobbying and tax revenues.

The answer to these challenges are clear as well. Governments focused on natural gas as a bridge fuel and building efficiency programs should have been focused on renewables and fuel-switching to a much greater degree. Wind and solar have no seasonal spikes in price, and managing intermittency is a matter of overbuilding cheap renewables, more transmission, and grid storage, all of which are clearly understood and modeled.

Building efficiency is good, but fuel-switching to eliminate gas furnaces and leaky high-GWP air conditioners by replacing them with modern heat pumps with low-GWP refrigerants with COPs of 3-4 avoids a lot more of the root causes of the problems we are facing. Low cost variance wind and solar supplying high-efficiency electric heat pumps is a long overdue policy.

This change in natural gas from a constantly low-priced commodity available in as big amounts as demanded was masked by lower demand during COVID as buildings sat empty through the winter of 2020-2021 and electrical consumption was down. However, as people returned to work or school in September and October of 2021, and the weather cooled, the completely predictable has occurred.

Heating demand and electrical demand has increased, demand for gas has increased, and supply of gas is effectively capped at a low level. Supply and demand being what they are, gas prices have shot up. This isn’t rocket science, this isn’t Kahneman and Tversky Nobel Prize-winning thinking on the psychology of how decisions are actually made, this is basic economics. Supply capped, demand up, price up.

I was predicting this in the first quarter of 2020 as an obvious outcome, and wasn’t alone in seeing it. The implications of fracking bankruptcies, COVID, and the Saudi-Russian price war should have been clear to anyone looking at the space. McKinsey had a report out late last year making much the same points, although they were doing it for different reasons than I am, as they happily work with oil and gas companies and countries to help them sell more fossil fuels more profitably, not something I choose to do.

Will policymakers see the writing on the wall clearly? Certainly Texas will refuse to accept the lessons of 2021, but that doesn’t mean the US as a whole will. Brussels and the European parliaments should be rethinking their power grids and hydrogen pipe dreams, and refocusing on actual solutions to the climate crisis. Canada should be backing away from its blue-tainted hydrogen policy, and pivoting to one that’s actually green.

But the usual suspects are blaming renewables for Europe’s current problems, just as they falsely blamed renewables for Texas’ problems earlier this year. Those voices are being amplified by the usual suspects, and policymakers are susceptible to hearing what they want to hear just as much as anyone. It’s a fight for reality, and sadly, the truth travels much more slowly than lies.

The lessons of 2021 are deep, rich, and far-reaching. But the pockets of the fossil fuel companies fighting for their lives, if not the lives of their children or their employees’ children, or the children of the world, are deep, rich, and far-reaching as well. As I’ve been writing about hydrogen regularly for the past years, pointing out the failures of assumptions about demand and supply, a regular refrain has been that while I’m clearly correct in what I’m saying, my analysis and the points of others such as Paul Martin, Mark Jacobson, and Robert Howarth, among many others, will be drowned in a flood of oil-soaked lobbying.