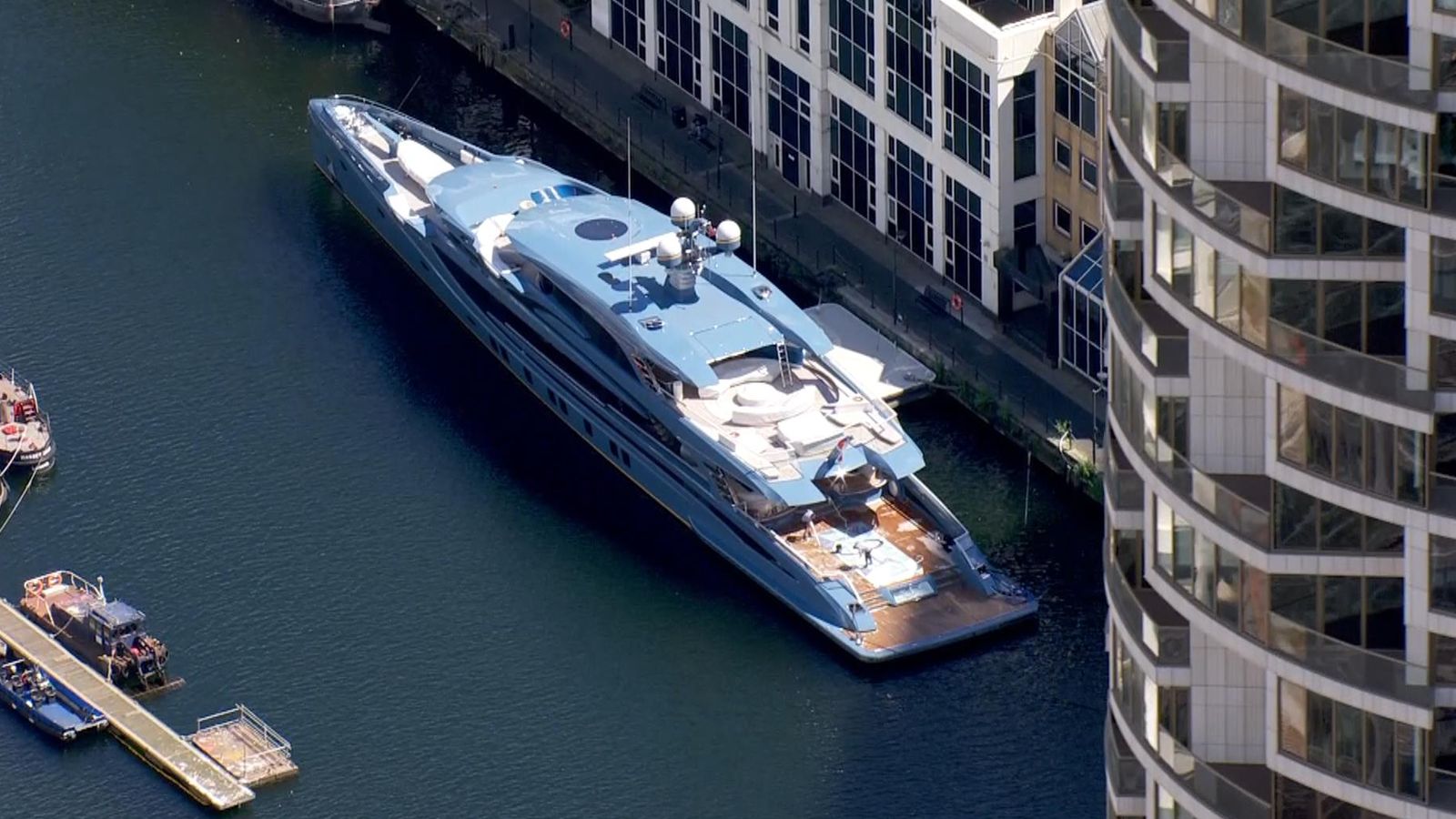 The captain of a £38m superyacht detained in London has said it is the victim of a “PR stunt” and that the government has “got the wrong guy”.

Sky News was given exclusive access on board the 58m (190ft) long Phi, which has been unable to leave Canary Wharf since March.

The vessel is being held under the UK’s sanctions regime against Russia – but her owner, named on the detention order as Sergei Naumenko, is not on any sanctions list.

“Phi is low-hanging fruit, she’s the only Russian boat around here.

“It was easy pickings done for social media.”

The superyacht, which features a freshwater swimming pool and what is described as an “infinite wine cellar” containing 400 bottles, was in London for an awards ceremony when it was detained by officers from the National Crime Agency.

The detention order describes Mr Naumenko as “a person connected to Russia”, which provides the legal basis for the asset to be held.

“It’s unjust and the owner doesn’t deserve it,” said Mr Booth – adding that his boss is considering taking legal action to get the vessel released.

He also denied suggestions made by Transport Secretary Grant Shapps that Mr Naumenko was connected to Russian President Vladimir Putin.

“I think it’s fair and just that they demanded to know exactly who the owner is, his source of wealth, where this boat came from,” Mr Booth said.

“All of that information has been provided and none of it links the owner of the boat to any position in Russian politics, to Mr Putin, or to any other political aspiration.”

Little is known about Mr Naumenko, who declined a request to comment. His legal representative told Sky News that he is a retired businessman who made his money in civil engineering and investment management.

The government has not confirmed the name of the superyacht’s owner but described her ownership as “deliberately well hidden” at the time of her detention.

According to documents seen by Sky News, Phi is registered to Dalston Projects Limited, a company based in the Caribbean dual-island nation of Saint Kitts and Nevis, and carries a Maltese flag.

“So that is all perfectly open. There’s no nefarious background to this. It is, in my world, bog-standard practice.”

As the vessel has been detained and not seized, Phi’s owner is liable for the £9,500 per month mooring fees she is racking up.

A Department for Transport spokesperson said: “We stand firmly by our decision to detain assets, such as the Phi, which satisfy both the scope and purpose of sanctions, and will always stand with Ukraine against this despicable and illegal war.

“The secretary of state will continue to act within his available powers to ratchet up the economic pressure on Russia and make life harder for Russian elites.”