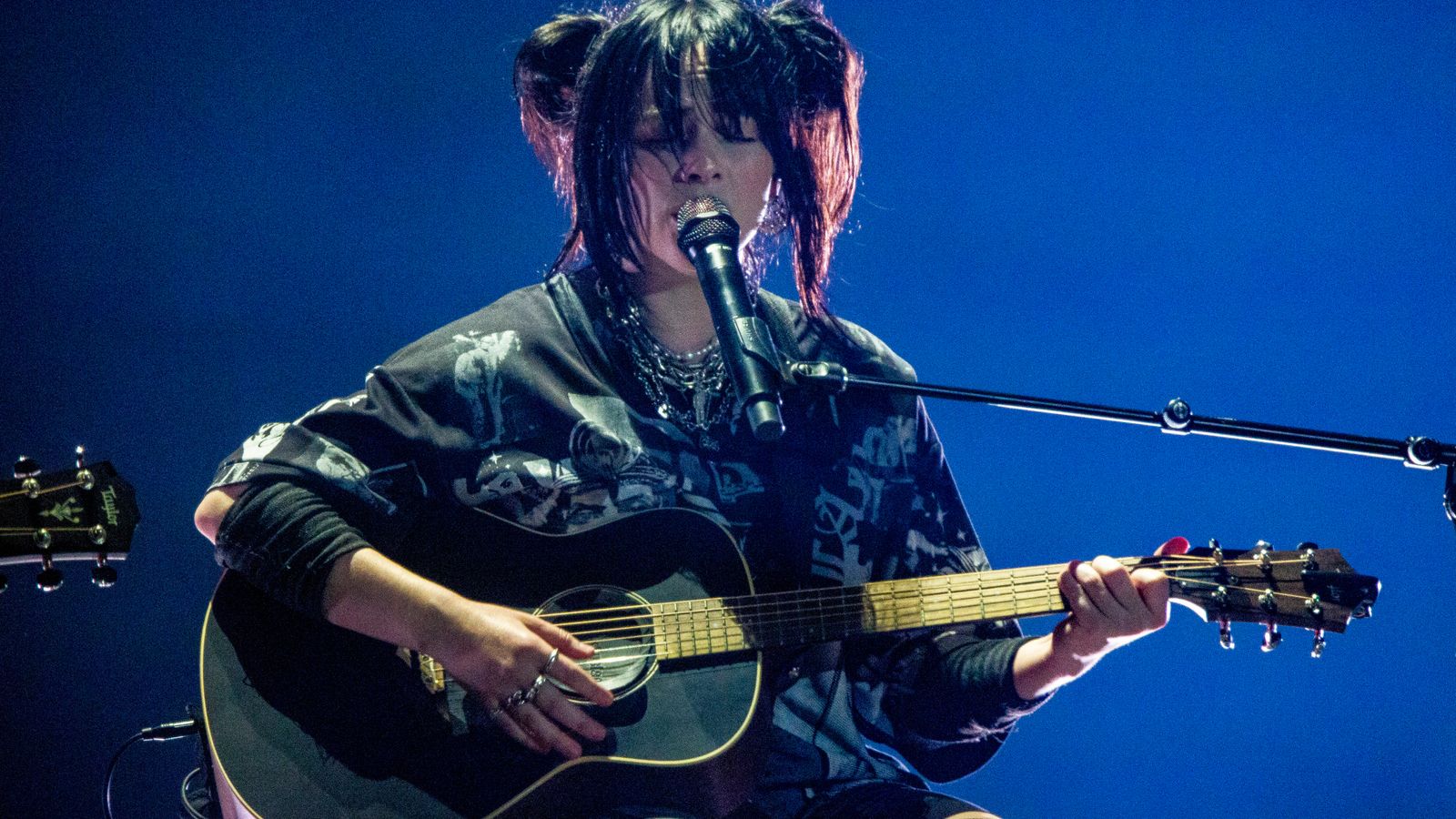 Billie Eilish has become Glastonbury Festival’s youngest ever headline act, with the Los Angeles-born star performing on the Pyramid Stage on Friday night.

During her set, the singer emotionally told the crowd that, despite her pride at performing at the festival, today was “a dark day for America”.

Introducing her song Your Power – a track about the abuse of privilege – alongside her brother and the song’s co-writer Finneas O’Connell, Eilish told the crowd: “Today is a dark day for women in America. It’s all I’m able to say about it. I can’t bear to think about it.”

The star was referencing the US Supreme Court’s decision to overturn the landmark Roe v Wade which has guaranteed women in the US the right to an abortion for almost 50 years.

Dressed in a black-and-white T shirt and shorts set featuring sensationalist newspaper headlines and images including David Bowie and Sharon Tate, the Grammy-winning singer was welcomed to the stage with rapturous applause from the largely Gen-Z crowd.

A stunned-looking Eilish told fans: “There are so many of you guys – Jesus,” before putting on a mock English accent and adding: “I love you guys so much, are you ready to have some fun?”

Eilish takes the title of youngest performer from the late Bowie who headlined the festival back in 1971 aged 24. Eilish, who began writing songs at just 11 years old, is no stranger to setting records.

Aged 18, she became the youngest artist and first woman to score a number one with their 007 theme, No Time To Die, which she wrote with her brother.

The 20-year-old’s set came on the first full day of music at the five-day festival at Worthy Farm in Pilton, Somerset, which is celebrating its 50th year after two enforced fallow years due to the COVID-19 pandemic.

An hour or two before her performance she posted a message for her 104 million followers on Instagram: “GLASTONBURY I AM HERREEEEE so excited!!!! see you soon”.

Performing to a heaving crowd of thousands, Eilish opened with the crowd-pleasing When We All Fall Asleep, Where Do We Go?

Her set featured the majority of her Grammy-nominated second album, Happier Than Ever, written during lockdown.

The record explores mental health and relationships, themes that have undergone much scrutiny for Eilish following her sudden and global fame.

In 2020, she spoke about suffering suicidal thoughts and periods of depression in the early stages of her career. She later told CBS News: “I don’t want to be too dark, but I genuinely didn’t think I’d make it to 17.”

She has said she was helped by her mother, and manager, Maggie Baird, as well as the process of working on her second album during lockdown.

In a nod to her career trajectory, the song Getting Older was accompanied by home baby videos of a young Eilish with her family projected onto the large screens at each side of the stage, showing her as a blond infant, singing and playing, while on the stage she sang: “Things I once enjoyed, just keep me employed now.”

Read more:
Roe v Wade: How did we get here?
What happens now – and why Supreme Court may not stop at abortion rights

As well as tunes from her latest album, Eilish also treated fans to her 2019 hit Bad Guy, which was the biggest selling single globally that year.

This performance follows months of intensive touring in the US and Europe, and the singer is currently in the middle of a sold out, six-show run at London’s O2 Arena.

A self-confessed lover of ‘moshing’, Eilish literally bent over backwards during her first song, as well as writhing on the floor and frequently running around the stage.

There was certainly no evidence of the teenage dance injury, which affected the growth plate in her femur, during the hour-and-a-half set.

The Worthy Farm audience was made up both of loyal fans, many of whom had travelled miles to see her despite large-scale rail strikes, and casual festival goers, keen to see what all the fuss is about. There was also a large sprinkling of older children – mainly girls – accompanied by parents.

Eilish made her Glastonbury debut at the Other Stage in 2019, after being upgraded from the smaller John Peel tent due to popular demand.

Despite technical issues back then, the Glastonbury charm clearly won the Bad Guy singer’s heart, telling fans: “This looks fun to go to. I would love to go to this… My God.”

During this show her attempts at audience interaction fell a little flat, with the UK audience perhaps not fully embracing her Californian tendency to encourage the crowd to “be present in the moment… and take a deep breath in and out”.

However, known for her attentiveness to her fans, known collectively as “Avocados” (Eilish is vegan) she frequently told the audience they were loved, and encouraged them to relax, even encouraging them to “scream loud” and “have a tantrum” during one of the songs.

‘I’m so undeserving of this’

Eilish temporarily called one of her recent London shows to a halt after fans passed out due to the heat. She also previously stopped a gig in the US earlier in the year to call out for an inhaler after a fan experienced breathing difficulties.

However, this wasn’t an issue at Friday’s Glastonbury gig. While the last festival in 2019 boasted record temperatures (31.2C) this year has proved a little more temperamental, with weather warnings issued and the threat of rain at regular intervals.

Eilish told the crowd: “I’m so undeserving of this. Thanks for letting me do it,” adding, “and you guys are troopers with your tents and s***!”

She closed with Happier Than Ever, which is a love letter to her hometown of LA.

On Friday night the former Beatle performed at a pub in Frome as a warm-up gig.