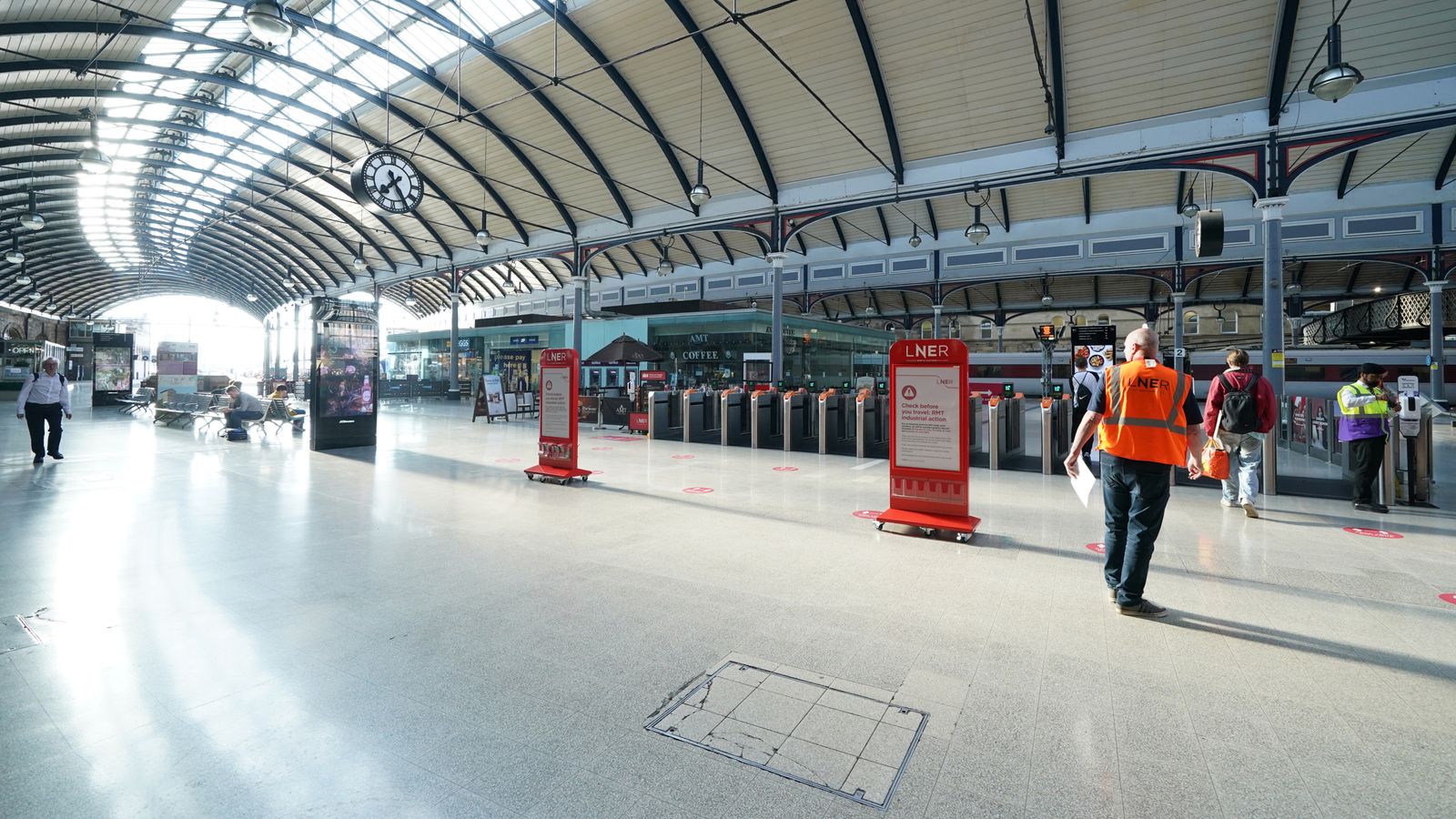 Thousands of people with weekend plans will face disruption and chaos as rail workers strike for the third day this week.

Only a fifth of services will run and half of lines will be closed as 40,000 members of the Rail, Maritime and transport (RMT) union at Network Rail and 13 train operators walk out.

Many people were able to avoid the chaos during the first two days of the strikes – Tuesday and Thursday – by working from home.

But for those with long-standing plans to travel by train for weekend events, this will not be an option.

Popular seaside resorts – such as Bournemouth, Blackpool, Margate, Llandudno, and Skegness – will have no rail services.

And even the services that are running will only operate between 7.30am and 6.30pm, with several major stations such as Birmingham New Street, Liverpool Lime Street and Manchester Piccadilly closing at 7pm.

Disruption is expected to affect many Sunday services too.

Phil Whittingham, managing director of Avanti West Coast, which is running around a third of its normal timetable on Saturday, said: “Weekends have seen very strong growth in passenger numbers over recent months and we’re concerned that many who travel at weekends will be less frequent rail users and may not realise the huge impact industrial action will have.

“We’ll be running a significantly reduced timetable on Saturday as result of the strike.

“There will be fully-trained staff on board and at stations across our network, but our trains may be very busy, and destinations will be served less frequently, if at all.”

Passengers with pre-booked tickets for Saturday are able to travel on Friday, Sunday or Monday instead, or claim a refund.

RMT general secretary Mick Lynch said its members are “standing up for all working people trying to get a pay rise and some job security”.

Read more:
RMT warns rail strikes could ‘escalate’ if deal not struck
Here’s what you need to know about disruptions
British Airways workers at Heathrow vote to strike during school summer holidays

He continued: “In a modern economy, workers need to be properly rewarded for their work, enjoy good conditions and have the peace of mind that their job will not be taken away from them.

“(Transport Secretary) Grant Shapps needs to get in the room or get out of the way so we can negotiate with these companies who we have successfully struck dozens of deals with previously.

“What we cannot accept is thousands of railway workers being thrown on the scrapheap after being praised as heroes during COVID.

“RMT will continue its industrial campaign until a negotiated settlement is reached.”

Mr Shapps said: “What is already clear from this week is the action they are taking, while not having the overall impact they might hope, is hurting the very people they claim to stand up for.

“And if they strike once again (on Saturday), it will mean more much-needed hospital appointments will be missed, those who don’t get paid if they can’t get to work will again be out of pocket and, on what is usually their busiest day of the week, small businesses such as pubs will be put under even more financial strain.

“However, while their action is hitting some people at the worst possible time, this week has also shown that overall rail strikes are not as effective a tool for the unions as they once were.

“Despite what the RMT may claim, we have not seen the level of overcrowding on buses or heavy congestion on roads some feared because the world has changed and many more people can now work from home.”

This week’s strikes are estimated to have cost the rail industry up to £150m in lost revenue and aborted planned upgrade work.

Talks between the RMT and rail employers have been held throughout this week and are expected to resume in the next few days.