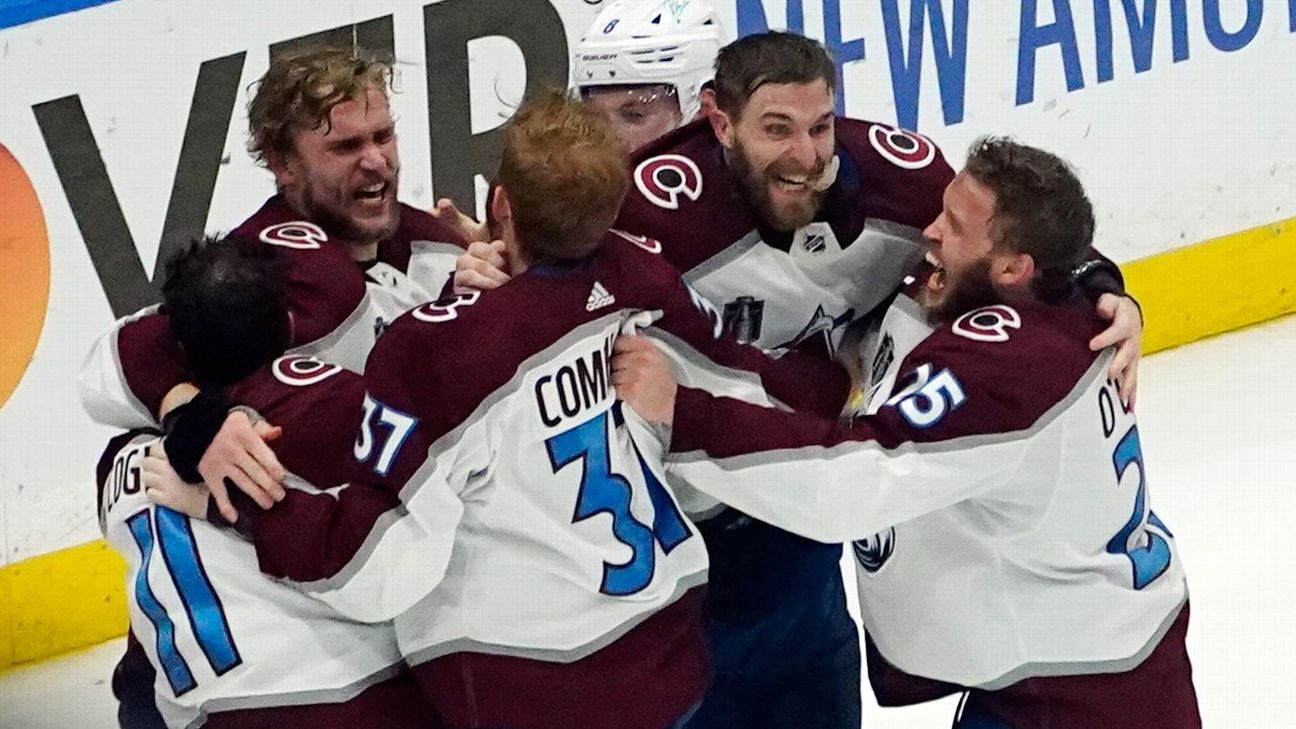 TAMPA, Fla. — The Colorado Avalanche are Stanley Cup champions for the first time since 2001 after defeating the Tampa Bay Lightning 2-1 in Game 6 of the Cup Final on Sunday.

Tampa Bay was making its third consecutive appearance in the Cup Final following back-to-back championships in 2020 and 2021. The Lightning would have been the NHL’s first team to win three straight Cups since the New York Islanders won four in a row from 1980 to 1983.

Earning the victory took another come-from-behind effort from the Avalanche to clinch their franchise’s first championship in two decades. They’d also played from behind in two of their three previous series-clinching games.

Steven Stamkos scored his 11th goal of the postseason 5-hole on Kuemper early in the first period, giving the Lightning a 1-0 lead. Tampa Bay outshot Colorado 10-8 through 20 minutes.

The Avalanche pushed back in the second. Nathan MacKinnon tallied the equalizer with a one-timer from the left circle past Andrei Vasilevskiy.

MacKinnon’s second goal of the series came on a delayed penalty call, and Tampa Bay took issue with the play not being called dead when Nick Paul had touched the puck. Determining whether Paul had possession was not reviewable, so the goal stood to tie the game, 1-1.

Colorado continued to pepper Vasilevskiy until Lehkonen finally broke through to put the Avalanche ahead 2-1. That marked Colorado’s first regulation lead of the series since Game 3.

The Lightning trailed to start the third period, but the Avalanche who were pressing with a quick 5-0 advantage in shots on goal. Colorado finished with a 30-23 edge in the game.

Vasilevskiy stood tall against Colorado’s onslaught in the final frame to give Tampa Bay a chance to tie. Lehkonen’s goal would stand as the winner to make Colorado Cup champions.

The Avalanche had failed once already at eliminating Tampa Bay. Colorado secured a 3-1 series lead going into Game 5 on Friday but couldn’t shut down the defending Cup winners in a 3-2 loss.

The Avalanche mostly controlled the series before that. Colorado secured a 2-0 lead over Tampa Bay with a 4-3 overtime win in Game 1 and 7-0 drubbing in Game 2. The Lightning responded with a lopsided 6-2 win of their own in Game 3 but couldn’t outlast Colorado in a 3-2 overtime loss in Game 4.

Tampa Bay produced a gutsy effort in Game 5 to silence Colorado’s electric home crowd and see the series extended one more time. The Lightning fed off their own fans in Game 6 but couldn’t shut down Colorado’s aggressive attack another time.

When Colorado last won the Cup 21 years ago, current general manager Joe Sakic was the team’s captain, iconically passing the Cup off to Ray Bourque. This time Sakic watched from above as the club he crafted finished the job again.

Colorado’s Cup win was the culmination of a dominant postseason run in which the Avalanche went 16-3 overall and swept both their first-round series against Nashville and the Western Conference finals against Edmonton.

It fit a theme for the Avalanche as well to hoist hockey’s chalice on enemy ice. Colorado was terrific on the road all playoffs, finishing with a 9-1 mark and completing all four of its series wins away from home.

“It feels like I’m in disbelief,” MacKinnon said. “It’s hard to describe, but to see all of these warriors battle … it just feels unbelievable.”

Colorado defenseman Cale Makar, who won the Norris Trophy last week as the league’s top defenseman, won the Conn Smythe after Game 6, recognized as the postseason’s most outstanding player.

Tampa Bay had a tougher road back to the Cup Final, falling behind in every series but its second-round sweep of Florida. The Lightning were down 3-2 to Toronto in the first round and 2-0 to the New York Rangers in the Eastern Conference finals but found a way past each opponent.

The Lightning also played much of the postseason without top forward Brayden Point. He suffered a lower-body injury in Game 7 against Toronto and missed over a month before returning for Game 1 and Game 2 of the Cup Final. Still not himself, Point would not return to the series.

Colorado also had injury concerns. Kuemper, Nazem Kadri and Andre Burakovsky all missed multiple games with various ailments (Burakovsky had been out of the Cup Final since suffering a hand injury in Game 2). Kadri’s broken thumb — suffered in a boarding incident with Evander Kane during the conference finals — was particularly bad. He managed a comeback in Game 4 of the Cup Final and scored the overtime winner.

The Avalanche persevered through their problems with impressive depth that was a cornerstone to their overall success. The Avalanche had 10 different players score at least one goal in the Cup Final and 17 registered a point or more (including Kuemper).

The goaltending matchup was a hot topic heading into the Cup Final and did not disappoint. Vasilevskiy rebounded from a subpar performance in Game 1 (.895 SV%) to be Tampa Bay’s best player from there.

Kuemper overcame adversity too. He was pulled from Game 3 for allowing five goals on 22 shots, but Bednar went back to him over backup Pavel Francouz for Game 4 and Kuemper delivered his most complete performance of the playoffs (37 saves, .949 SV%).

In the end, Kuemper made enough saves to help deliver a Cup for Colorado.