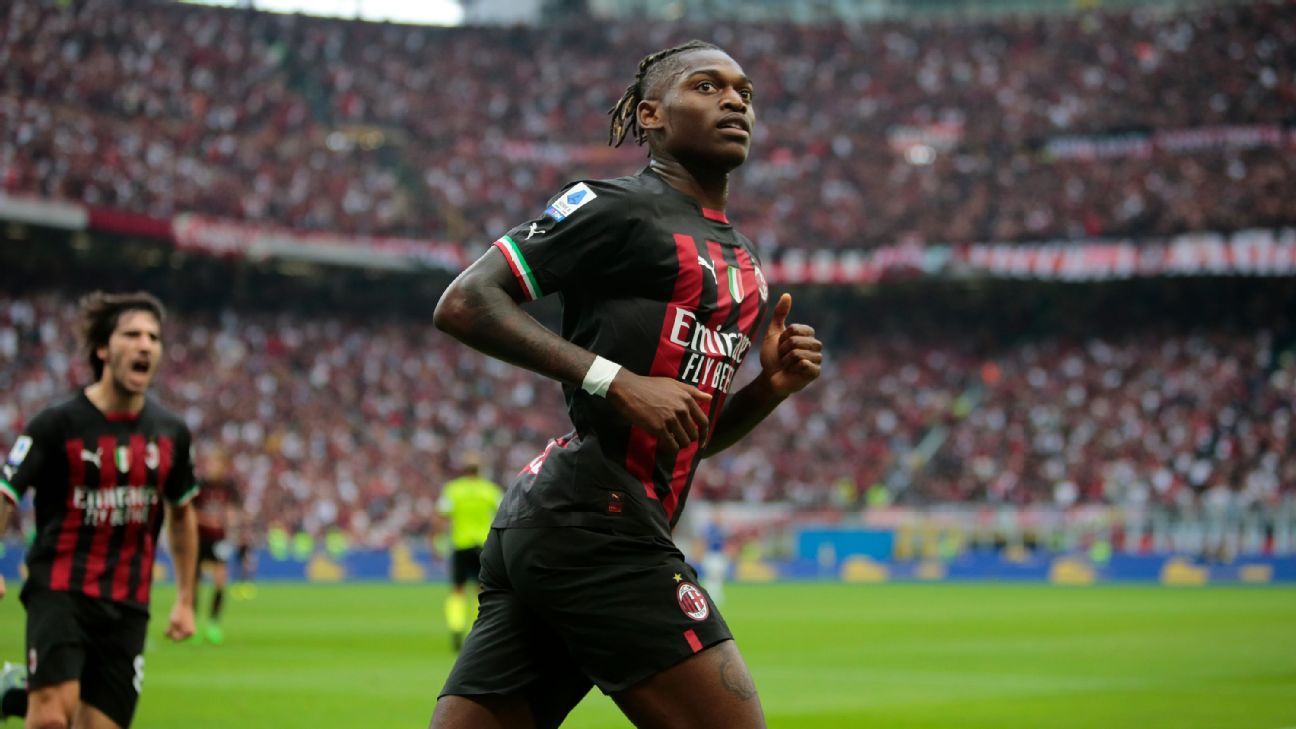 Another weekend of headlines, golazos and unpredictable finishes across Europe’s biggest leagues. From AC Milan securing the first derby win of the Serie A season to fans, coaches and players raging at VAR in the Premier League, there was no shortage of drama.

Jump to: Talking points | Best goals | Teams in trouble | MVP of the Weekend

While we wait for other big derbies, other big top of the table clashes or other mouthwatering matches between European giants, Saturday’s Derby della Madonnina between AC Milan and Internazionale was the first big blockbuster of the current season and it was awesome.

It had everything: goals, drama, suspense, quality individual performances, mistakes (look away now Hakan Calhanoglu) and a winner. Milan, for now, is AC Milan’s kingdom while Inter are now two points behind their archrivals in the table. And Rafael Leao is the undisputed king of the city. Serie A’s player of last season was outstanding with two goals and an assist. His second one is a tribute to the great George Weah with so many similarities in how he took that goal, his little hook and finish. This 3-2 win for the reigning champions is not decisive in the title race but it showed that whoever wants their crown will have to fight hard to get it. — Laurens

Watching Borussia Dortmund can at times feel like a horror film, with serene moments sharply interrupted by the stuff of nightmares. Anyone recall their remarkable collapse at home to Werder Bremen two matchdays ago? Taking that jump scare out of the equation, they’ve been superb to open the campaign, broadly going back to basics and picking up their second straight 1-0 win in the Bundesliga, and their fourth win in five. It’s also their third 1-0 in that streak.

They’re even above Bayern Munich right now, proof that Edin Terzic is worth backing. Friday’s narrow win over Hoffenheim was fairly routine: Marco Reus (two goals, two assists this season) was his vintage self in stroking a Julian Brandt first time pass beyond Oliver Baumann to give Dortmund a 16th minute lead they’d hang onto with little difficulty.

The trick from here will be continuing to build momentum while maintaining perspective as to what Terzic is building: In addition to a trip to Manchester City in the Champions League in two weeks, Dortmund will need to be as cohesive as possible for Bayern’s visit at the start of October. That will tell us as much about Dortmund’s title contention as games against RB Leipzig, FC Koln and Schalke 04. — Tyler

Honours even on Merseyside

It was an emotional afternoon at Goodison Park with two clubs and sets of fans united in sorrow after a nine-year old girl was shot dead in her house last week in Liverpool, and it was maybe fitting that there was no winner in the Merseyside Derby this time around.

The two keepers, Alisson and especially Jordan Pickford, were the reasons for the stalemate after some fantastic saves and if the game took a while to get going, it turned epic in the second half and, in the end, it was a good 0-0 draw but this is a result that doesn’t suit anyone.

Liverpool feel like they have dropped two points while Everton could also smell victory at times. The game also reminded us that there is something not right about Mohamed Salah at the moment. Without having a bad game (0.19 xG and 0.24 xA for him in the end), he didn’t look at his best. — Laurens

Janusz Michallik points the finger at Mohamed Salah & Trent Alexander-Arnold after Liverpool are held by Everton.

Gavi lights up the Sanchez Pizjuan

We could single out half the Barcelona team for praise after their 3-0 win at Sevilla on Saturday night. Robert Lewandowski scored again to make it five LaLiga goals in four games. Jules Kounde provided two assists against his former club. Raphinha impressed again, opening the scoring and contributing to Barca’s third. And Eric Garcia grabbed the first goal of his professional career.

It was another player who was named man of the match though. Gavi,18, was everywhere at the Sanchez Pizjuan, working tirelessly to press when out of possession and taking care of the ball when he had it, with a 90.9% pass completion rate. With all the noise around Barca’s frantic summer transfer window, we shouldn’t forget that two of the most exciting young players anywhere — Gavi and Pedri — were already right there at Camp Nou.

This will be a big season for Gavi. He already looked a star in the dysfunctional Barca of early last season. Now, in a side transformed by Xavi’s coaching and playing alongside world-class professionals and leaders like Lewandowski, it’s time to shine. And that’s before we even mention the key role he should play for Spain at the World Cup. — Kirkland

The finish from Marcus Rashford is good but the pass from Bruno Fernandes is sublime. It starts with a quick pass forward from Christian Eriksen — Manchester United‘s best player in the 3-1 win over Arsenal — but it’s made by the vision and delivery from Fernandes.

A word, too, for the finish from Rashford. He has struggled for form for nearly two years but that was a high-pressure moment in a big game and he kept a cool head — Dawson

MAN UTD ARE IN FRONT AGAIN! 🔴

All class from Vinicius

Vinicius Junior‘s development into a cool-headed, clinical goal-scorer isn’t news. After all, this is a player who scored 17 goals in LaLiga last season. The quality of his finishing still has the ability to surprise, though, and that was the case on Saturday when he opened the scoring in Real Madrid‘s 2-1 win over Real Betis at the Santiago Bernabeu.

His clever movement in the ninth minute saw him beat the Betis offside trap, stepping inside full-back Youssouf Sabaly and setting off safe in the knowledge that teammate David Alaba has the vision and technique to find him with the pass. It was Vinicius’ next touch that was truly special, scooping the ball over goalkeeper Rui Silva, and running off in celebration before it had nestled in the back of the net. It’s three goals in his last three games for Vinicius, helping fire Madrid to the top of the table with maximum points so far. — Kirkland

There were many things to frustrate the Bavarians on Saturday — Leroy Sane‘s wasteful finishing, the heroics of goalkeeper Frederik Ronnow to name just two — in their 1-1 draw with Union Berlin, but surely even the most miserable Bayern fan could appreciate Sheraldo Becker‘s brilliant goal to open the scoring.

Union’s top scorer pulled off an elegant volley from Christopher Trimmel‘s looping set piece to leave Manuel Neuer grasping for air, and it must be said how difficult a shot this was to pull off: seriously, try this at your next pick-up game and see where it ends up. Though Bayern would swiftly level through an equally thundering finish by Joshua Kimmich, Union had more than enough to hang on for a well-earned point. — Tyler

Pressure on Cooper at Forest

Nottingham Forest cannot be accused of not showing ambition following their return to the Premier League but, despite spending close to £150 million on new players this summer, they still find themselves in the relegation places after six games.

The 3-2 defeat at home to Bournemouth on Saturday is a devastating blow after going in at half-time 2-0 up — particularly after enduring a 6-0 demolition by Manchester City three days earlier. Steve Cooper needs to get his new-look squad to gel quickly to avoid an immediate return to the Championship and the next three games against Leeds United, Fulham and Leicester City will be vital if they’re going to get their season up and running quickly.

The danger for Cooper is that, if he cannot turn things around, it will be very tempting for Forest to change managers when the Premier League breaks for the World Cup in November. Forest probably wouldn’t even be in the top-flight if it wasn’t for Cooper but football is an ungiving business, especially when there’s so much money on the line. With so many new players arriving, Cooper is still trying to figure out his best team but it needs to happen sooner rather than later — Dawson

You hate to panic this early in the season for any team, but something is not right in Leipzig at the moment. Saturday’s 4-0 shellacking at Eintracht Frankfurt, their second defeat in their last three Bundesliga games, boasted nothing to feel good about. From the xG battle (3.10 to 0.18) to having zero shots on target compared to Frankfurt’s 9, the Red Bull boys endured one of those afternoons in which you concede early goals and then just have to grit the teeth, hanging on for the full-time whistle.

Things should clear up over time as Timo Werner settles back in at his former club and unlearns some of the bad habits he must have collected at Chelsea, but the schedule ahead is far from forgiving: Champions League clashes with Shakhtar Donetsk and Real Madrid either side of a league game with Dortmund await over the next 10 days. Here’s hoping Domenico Tedesco has the magic words to rally a team in search of confidence. — Tyler

VAR-cical scenes in the Premier League

On any other weekend, Eriksen would have had the MVP title in the bag following an outstanding performance during Manchester United‘s 3-1 win against Arsenal at Old Trafford, but despite dominating the game for Erik ten Hag’s side, the former Tottenham Hotspur midfielder can’t compete with VAR in terms of the impact made.

VAR — the video-assistant referee — is supposed to be there to help tidy up clear and obvious mistakes by officials and also ensure that no goals are incorrectly awarded if any infringement has taken place.

But this weekend, the VAR dominated the Premier League for all the wrong reasons.

Newcastle and West Ham both had seemingly good goals disallowed against Crystal Palace and Chelsea, respectively, after VAR instructed the match referee to review his initial decision to award it. The Premier League has now ordered the referees’ body — PGMOL — to explain how both decisions were so incorrectly made.

Then there was the failure to spot a bad Virgil van Dijk foul on Amadou Onana during Liverpool’s 0-0 draw at Everton, the length of time it took to decide that Alexis Mac Allister‘s goal for Brighton against Leicester was offside and, similarly, why it took almost three minutes to decide that Eriksen was shoved off the ball in the build-up to an Arsenal goal which was eventually ruled out.

VAR should be there to make the game better, but this weekend, it made it worse and took the headlines away from so many great performances of players and teams on the pitch. — Ogden