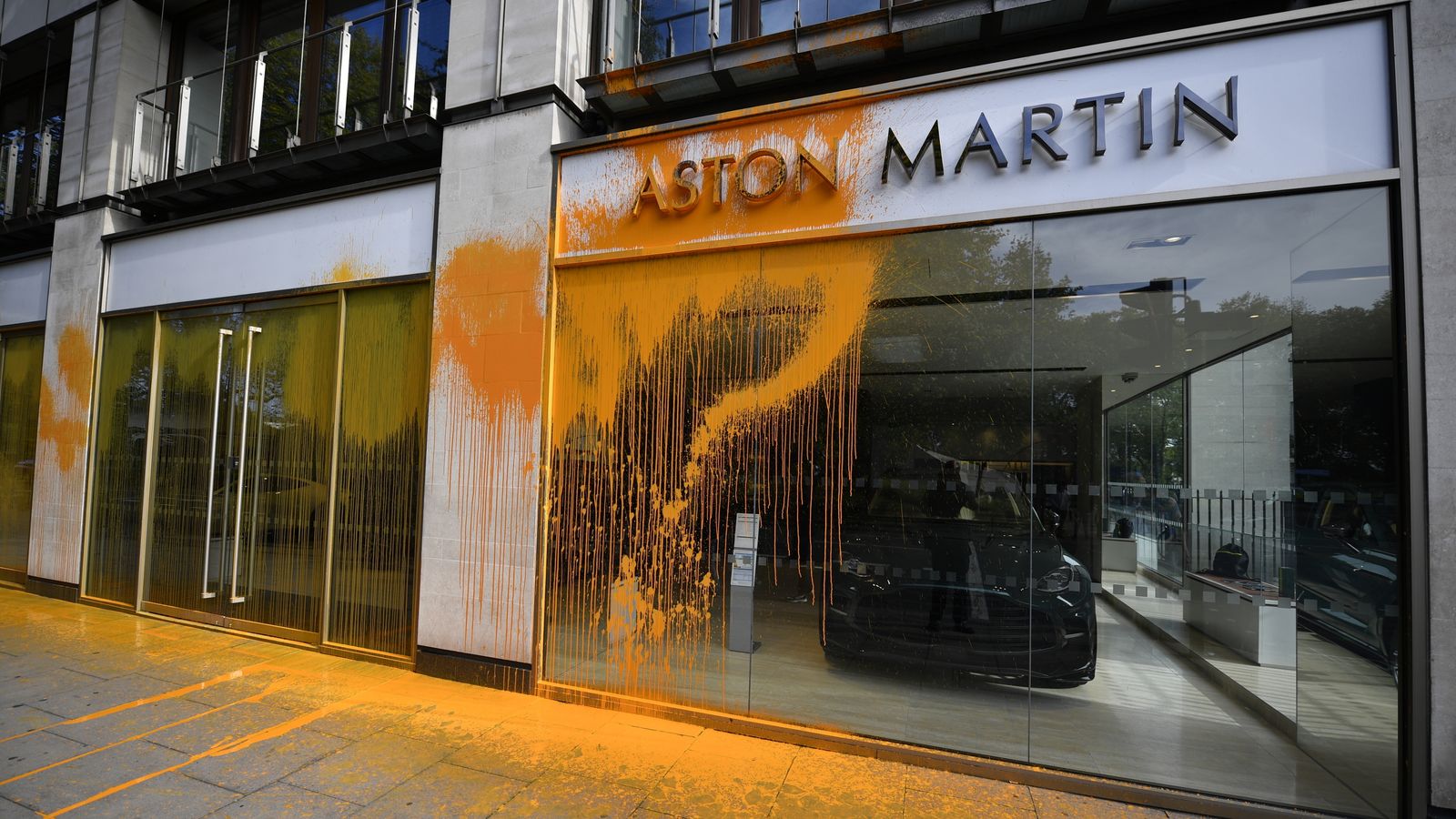 Demonstrators from the environmental group, who are calling for the government to halt all new oil and gas licences, glued themselves to the road in central London at around 11am on Sunday.

One was then filmed spraying the front of Aston Martin’s showroom with bright orange paint.

It comes after Home Secretary Suella Braverman outlined plans to crack down on such protests as part of the Public Order Bill.

She, Mayor of London Sadiq Khan, and Chancellor of the Duchy of Lancaster Nadhim Zahawi met this morning to apply for a new injunction against Just Stop Oil causing disruption on London’s roads, Sky News understands.

Transport for London already has an order against Insulate Britain, which engages in similar activities, but a separate one needs to be taken out for Just Stop Oil.

Under the home secretary’s plans a new criminal offence would be created for disrupting the functioning of key infrastructure such as airports, railways and oil refineries.

‘Locking on’ – when people glue themselves to roads or buildings – would be punishable by either six months in prison or an unlimited fine under the new proposals.

Ms Braverman has said she “will not bend to protestors attempting to hold the British public to ransom”.

‘We will not be stopped by injunctions’

On Sunday the protester spraying paint was heard saying: “We will not be stopped by injunctions that are intended to silence protest. We are a non-violent civil disobedience movement.

“We know that the injunctions against us are irrelevant in comparison to mass starvation, with the genocidal policies our government is pushing for, with the 100 fossil fuel licences in the North Sea.”

On Friday, members of the group also threw tomato soup over Van Gogh’s famous Sunflowers painting at the National Gallery.

Two women have since been charged with causing criminal damage.

The following day they staged further road blocks in London by glueing themselves to roads.

Peyton Manning, Michigan’s split title and the enduring conspiracies of 1997
Tech layoffs send visa holders on frantic search for employment to avoid deportation
Jack Dorsey’s Block backs bitcoin mining company that wants to bring 25-cent electricity to rural Africa
‘May the Force be with you’: PM ‘sad’ as Javid to step down at next general election
Amber Heard files appeal against Johnny Depp libel trial verdict