If this was a “normal” party congress then the speech by President Xi Jinping would have been his swansong.

But this is not a normal party congress. The speech instead felt more like a consolidation, an enshrining of sorts, of Xi’s vision, Xi’s path and Xi’s China.

The party congress is the most important political event here and this one is arguably the most important in decades. It happens once every five years and its main purpose is to select those who will lead the country for the coming term.

Day one always opens with a “work report” given by the current president, reflecting on the previous five years and setting out priorities for the next.

According to decades of precedent it should now be Xi’s time to step down, having completed two terms and been in power for 10 years.

But it’s almost certain this won’t happen. He successfully scrapped the constitution’s the two-term limit in 2018, meaning he could now, in theory, be leader for life.

This is why although today was, in theory, more about policy than personnel, all eyes were on the man delivering the speech.

And it was a speech that very much reiterated his central goals and ideas. Most importantly perhaps, his promised “national rejuvenation” for China – a highly nationalistic vision where China is unapologetic about its place in the world and the control exerted on its people. 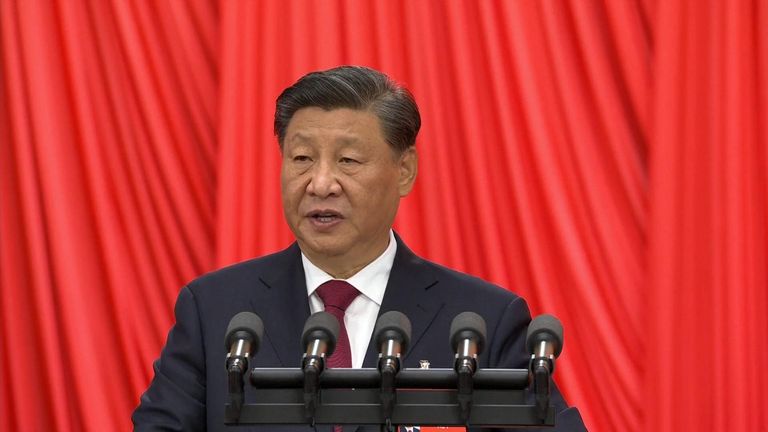 ‘China will never renounce use of force’


The message was clear: to have a strong China there must be a strong Communist Party, indeed under Xi it is a party that has reached much further and deeper into the lives of ordinary people than it has for decades.

Many Chinese people will have been listening closely to what he had to say about the continuing zero-COVID policy.

Anyone who was hoping to learn of it easing will have been left disappointed.

But in the context of the current ubiquity of zero-COVID regulations in people’s lives, and within a nearly two-hour long speech, it was a comparatively brief mention. It wasn’t dwelled on and it wasn’t returned to, an awareness perhaps of people’s frustration.

The loudest applause from the over 2,000 delegates came when he spoke about the “reunification” of Taiwan, the self-governing island that China sees as its own.

He reiterated a long-standing policy that China wants peaceful reunification but will “never promise to renounce the use of force” and will “reserve the option of taking all measures necessary”.

Hard language yes, but not necessarily any harder than what we’ve heard before, and certainly no commitment to any sort of timetable for invasion. War over Taiwan would be very costly to China, and it no doubt wants to keep its options open.

The economy was a big theme too with lots of focus on the “common prosperity” project which aims to tackle inequality, and the claimed “eradiation” of extreme poverty in China.

But there was little mention of some of the more extreme challenges the economy currently faces; a crisis in the housing sector and the zero-COVID stranglehold.

In all, it was a very confident speech from a very confident leader. Remember, when Xi came to power 10 years ago there were rumblings of discontent in China, over issues such as corruption and inequality.

In many ways he has delivered on a lot of what he promised; China is richer and stronger than it was, and corruption has been largely bought to heel.

But it is also a significantly more closed, more controlled and more paranoid place.

In the last decade, Xi has vastly increased his power and that of the state, he’s stepped up surveillance and censorship and born down on foreign ideas and investment.

He has brutally purged his rivals and has cracked down on the media, on private companies and on civil society.

The change he promised has been pursued not via reform but via control. And while he’s here to stay, so is this path for China.