The health secretary has announced the government will block-book beds in residential homes so around 2,500 people can be released from hospitals when they are medically fit to be discharged.

Steve Barclay gave a statement to the Commons outlining the government’s plans to help ease the “severe pressures” on the NHS – hours after his talks with unions to stop strikes ended in failure.

He admitted the “experience” for some patients and staff in emergency care has not been “acceptable” in recent weeks.

He said the recovery of the health service falls into three main categories:

SNP leader Nicola Sturgeon announced a similar plan this morning as she revealed hospitals across Scotland are “almost completely full”.

The health secretary told MPs the number of people in hospital with flu “this time last year was 50”, whereas this year, “it was over 5,100” – as he once again sought to blame the NHS pressures on flu, COVID and Strep A.

Health leaders have previously criticised this line from the government, saying the “fundamental problem” is the workforce shortage.

There are around 132,000 vacancies in the NHS and 165,000 across social care, about the same size as the population of Newcastle.

Shadow health secretary Wes Streeting called the solutions announced today “sticking plasters” and said there needs to be more staff in both the health and care sectors, better pay, more training and more investment in primary care so people can access GPs.

He said “everyone knew” the NHS would come under pressure this winter and the plans today are “simply too little, too late”.

“After 13 years, this just isn’t good enough. The prime minister might not rely on the NHS, but millions of ordinary people do, and they are sick and tired of waiting,” he said.

The statement comes after Mr Barclay failed to prevent further strikes in the NHS as talks with union bosses broke down.

Despite the prime minister saying he was “happy to talk about pay” – in what was seen as a breakthrough – Unison said there were no “tangible concessions” which would enable Wednesday’s ambulance strikes to be called off.

The Royal College of Nursing (RCN) said ministers “have a distance to travel” to avert its second-ever set of strikes on 18 and 19 January, while Unite said any suggestion that a one-off pay reward could be made in exchange for a boost in productivity was “absolutely ludicrous”. 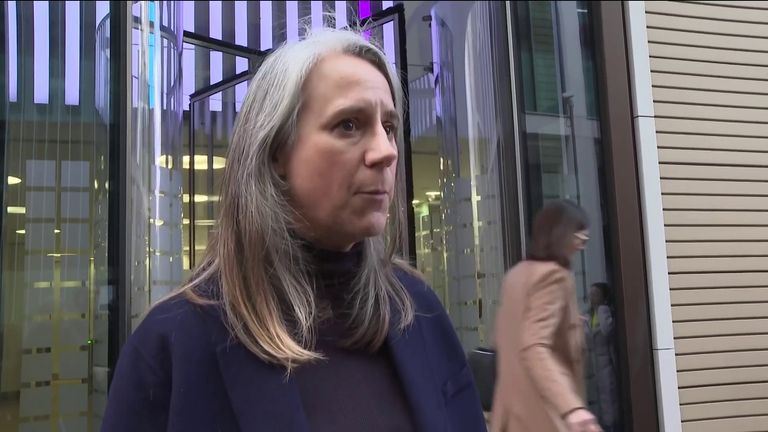 Sara Gorton, the head of health at Unison – has said strikes in the NHS will continue as there were no breakthroughs on pay

Mr Streeting said the strikes could have been avoided if Mr Barclay “had just agreed to talk about pay” with the nurses, but instead of “serious talks” earlier today, he offered “45 minutes of lip service”.

The strikes come at a time when the NHS is facing more pressure than ever.

Many hospitals are struggling to free up beds, with the situation exacerbated this winter by factors such as high levels of flu and rising COVID cases.

About 13,000 people in English hospitals are well enough to be discharged but still need some care before they can return to their own home.

In his Commons statement, Mr Barclay said other measures to help the NHS include reducing inspections by the Care Quality Commission in the coming weeks to free up staff, and opening up more routes for patients to get free treatment in the private sector.

To make the NHS more resilient for next summer and winter, he said the government will “capitalise on the potential” of virtual wards, where patients can be “treated at home with technology and wrap around care”.

But “to break the cycle” of the NHS coming under increased pressure, he said there needs to be more done before people end up in hospital and there will be a review in social care of how to help residents at home rather than taking them into hospital, such as with falls.

“We have to treat patients earlier within the community… to give the right support to people where they are,” he said.

New electric motor kit for kayaks silently adds over 80 miles of range
‘Nobody is born smart’: Ex-commander of Russian mercenary group apologises for fighting in Ukraine
Tiny, radioactive capsule went missing. See where it was found
Priscilla Presley contests validity of Lisa Marie Presley’s will
Why is the UK economy predicted to perform so badly?